October saw the return of Norfolk Cycling Events’ Autumn Classic Sportive, where riders choose to cycle distances of between 10 to 100 miles around the beautiful mid-Norfolk country lanes. Keyworker Zizzie Moore took part in the event, cycling for Break and proved she is a true wonder woman and fundraising superstar! We caught up with her afterwards and asked her to share her journey.

Tell us a bit about yourself?

I work for an emergency department in the NHS and my husband is a mental health nurse so we have worked through lockdown. We have a seven year old son who is the most active child you can imagine. I’m also a 2nd degree Tae Kwon-Do black belt, very amateur photographer and belly dance with a local group. I do roller derby with Leicestershire Dolly Rockit Rollers and my son does roller hockey with Midland Mooseheads, ice hockey with Sheffield Steelers Academy, swimming, football, and whatever other outdoor activity he possibly can. So you can imagine lockdown somewhat curtailed a lot of our activities.

We got our bikes out of the shed mainly to keep our skating muscles up and completely fell in love with it. We’ve always cycled (even the cat comes too, either in a pet basket or a trailer). When my son first started cycling I had to skate alongside him to keep up with him which was great because he could tow me up any inclines.  However, cycling together (and on my own) has been brilliant, so good for the soul as well as fitness and we have had so many adventures and done challenges together and just generally had a lot of fun.

I fundraise for Midland Mooseheads and the Dolly Rockits which in both cases are group efforts so it’s never been a major headache. When there are a lot of you, it’s easier to raise raffle prizes and they are normally for events that we are doing so it’s all team work.

When Sarah at Break first asked if I could raise £50 to do the Sportive (which was my first one), I freaked and thought I would never manage that in four days because, of course, I had left it to the last minute! This was all down to my husband, by the way, who had pretty much organised and sorted all this and decided I was doing it.

So I set up a Just Giving Page, sent an email to close colleagues, friends,  family, plastered it all over social media and crossed my fingers. I was in for a shock. In just four days they had been so  generous - even someone I have never met - though we are supporters of each other on Love to Ride website, regularly high fiving each other’s efforts.

The main theme of their responses, apart from “what’s wrong with you, are you mad doing a Sportive in Norfolk in October?” were focused on what a fantastic and worthwhile charity Break is. I think the amount raised was more due to the amazing work the charity does rather than in support of me as lots of people are doing charity work all the time.

Have you ever fundraised before?

I have never fundraised on my own like this before and just didn’t quite know where to start. It was also a confidence thing, when it’s a group effort you can hide more but when you are on your own doing something solo, especially in these times when people have been struggling financially more so than usual, it can be quite daunting. 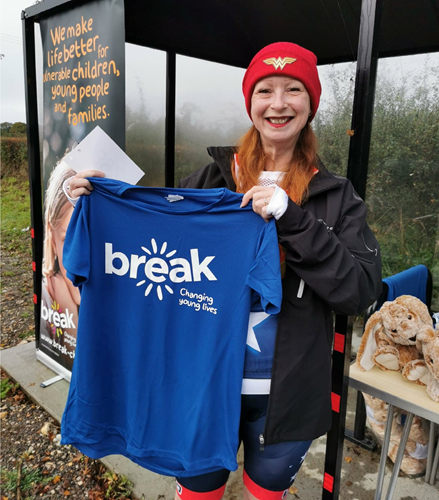 What inspired you to get involved in this challenge?

I wanted to do a Sportive and there are quite a few going on around the country but I wanted to do one which had an external benefit rather than just for me. When I came across Break, having friends who work with children who are disadvantaged and also having my son who I can give so much to, I just wanted to share something, do something for these young people who aren’t as fortunate as a lot of children I know, through no fault of their own.

I’ll be honest, the fact that the Autumn Classic Sportive in Norfolk was relatively flat (I’ve cycled in the Lake District – definitely not flat) that was an added bonus.

There were logistics to consider, we live in Leicestershire, a few hours’ drive from Norfolk, my son was back at ice hockey and we had to get over to Sheffield straight after the Sportive, having only four days to sort all this and a few problems with my bike. Although, booking a hotel, programming a satnav and putting some bar tape on my bike are hardly massive issues, sitting at Sheffield Ice Arena dressed in a Wonder Woman cycling outfit covered in mud raised some eyebrows.

All this only added to the adventure of my first solo fundraising challenge and first Sportive and I wanted to really do Break proud and support them as much as possible.

How much was your target and how much did you raise?

That’s amazing, well done! How did you feel after the event?

I was so elated. My son was at the finish line and cheered me across. It was a fabulous event and I had done the last few miles with a chap who was lovely and encouraging and slowed down so I could cross the finish line in front of him on my own which was so kind.

My son had got a teddy bear for me from Break (now named Autumn and is my cuddle after every ride) and my husband bought me a mug from Break, I couldn’t wait to find Sarah to tell her I had done it and was so proud of what I had achieved. 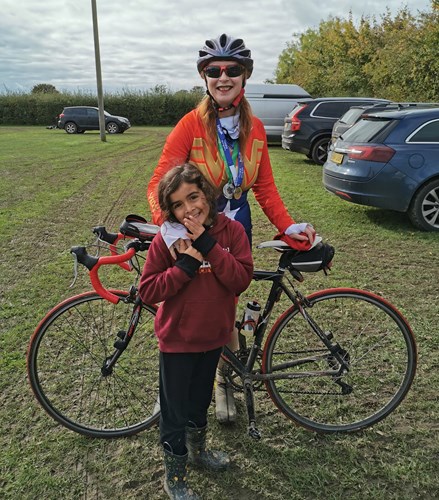 What would you say to someone who was worried about fundraising?

If you feel inspired by Zizzie’s story and would like to fundraise for Break we have lots of options, just visit our Fundraise for us page or you can download your own fundraising pack below.